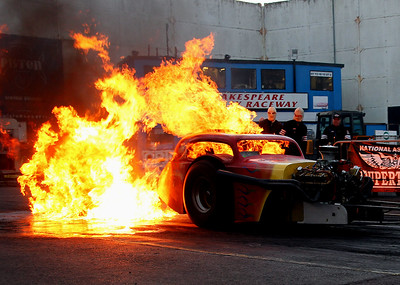 Drag racing is an adrenaline rush. Teams build cars to go as fast as they possibly can. Installing nitrous tanks, and just overall rebuilding engines takes time, patience, and of course, money. So when a car is at the starting line, revving to take off, and suddenly a *POP* comes from the engine and the whole hood flies off, you know that time and effort was almost for nothing. Engine pops are common, and there is a multitude of reasons as to why this happens, let’s go over some main ones.

There is a large spectrum of variables that go into the engine backfire. The first is air to fuel ratios within the engine. Air intake helps to oxidize the fuel lines. If there is no air, gasoline and fumes build up and once the throttle is hit, BLAMO, there goes your engine, and probably your hood too.

Drag racing cars utilize many methods in order to go faster. One of the most common uses is Nitrous Oxide. Many racers will have a line from the trunk to the main fuel line. Accompanied by a button (usually found on the steering wheel), the driver will hit the button which would release NO2 through the line and into the fuel injectors. This would give the car an insane amount of power and acceleration. Unfortunately, everything relies on pressure. The second that light turns green, that car is performing at top-tier levels. Any mistuning can cause a leak in the line and can cause an explosion and fire to engulf the bottom of the car.

It is extremely dangerous when an engine blows or a nitrous line leaks. The driver can catch fire or take hi-flying engine shrapnel to the face and body. Safety requirements are in place to make sure drivers aren’t at risk. Unfortunately, not all safety precautions can result in perfection. A team of safety officials is always on call and ready to go in case of an emergency.

The Buckeye state ad campaign "Ohio is for ...Read More